So I came across this old article on Huff Post about things that a parent can do for an anxious child, and I loved all of it.  Especially the part about telling them why it’s good to worry (anxiety can grow exponentially once people start worrying about how bad it is to be anxious.).  I have a little something to add to the “thought detective” part though.

A “thought detective” is someone who investigates fearful thoughts.  They look at the evidence before they decide whether a fearful thought is warranted or grounded in reality.  And, with kids, sometimes the evidence includes the reaction of a trusted adult.

And this sort of explains why I found myself purposely eating an M&M off my therapy office floor.  I know.  GROOOOSSSSS.  But, hey, I’m still alive, and remaining alive was kind of the only point.

Basically, we as the adults in our kids’ lives, shape our kids’ realities.  You know how when they were toddlers, they looked to us when they fell off their trikes, and our reactions dictated whether or not they would erupt into a dramatic, tearful display?

Well, opportunities abound for us to show our kids that the world is not always as dangerous as our amygdalas suggest.  And, especially if your kids have a genetic propensity for anxiety (who am I kidding.  Who does NOT have anxiety in their family-tree?!), we have to start teaching our kids to defy irrational fears from early-on.

How?  Well, little kids can’t understand “reason.”  We don’t sign up a three-year-old for cognitive behavioral therapy.  Instead, the only thing we can do is lead by our stoic example, the same way we keep a stoic face then the trike injuries don’t exactly call for a trip to the emergency room.  When our kids are young, we basically program our kids’ realities. Of course, in really extreme situations (like when this guy keeps following your kid around ), no matter how stoic you react, the poor kids’ limbic system may override even the calmest of moms. (I have no flipping clue why my two year old is not deathly afraid of this guy.  I’d imagine it has to do with his big brothers embracing him.) 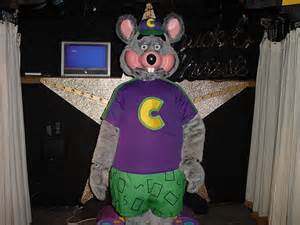 We can help solidify that things are not dangerous by doing whatever is feared in front of the kids.  Non-chalantly.  As if it is totally normal to hug a man dressed as a giant mouse with the creepiest teeth I have ever seen.  (One step of progressive exposure therapy- somewhere between imaginging the feared thing and actually exposing yourself to the feared thing- is observing someone else do the feared thing.  So basically, you are giving your kids some good, solid exposure therapy.)

I thought about this phenomenon on a few occasions recently:

1)  Did your kid just see this gross mask on a display at Party City?  Becfore kid even starts you fret, Haha, you say, it’s that a silly face made of rubber with bright red face.  Some person in a factory made that silly thing. You say all this while touching it and squishing in in your hand.  You even contemplate putting it on your face for extra exposure-therapy.  But those masks smell so nasty.

2) Preschooler freaking out about getting water in his eyes in the bath? Your eyes are water proof and can get lots of water on them, and it feels kind of funny, but it doesn’t hurt, is a great matter-of-fact statement as you continue to pour water on his head.  The only problem with this programming was that it was used against me a few days later when my child insisted that it was okay to ride his bike in the rain.

3)  I had an 8-year old super germ-phobe (In other words, severe clinical anxiety, emerging OCD) in therapy, and I offered her some M&M’s.  Of course, she wouldn’t take them from my hand, only from the package, and she was sure to use the hand sanitizer first.  As we were chatting, she looked utterly disgusted as I casually dropped an M&M on the floor and promptly popped it in my mouth. Then I cancelled the next session because I had an insane stomach amoeba.  Just kidding.  I indeed triumphantly survived my candy touching a spot of low-traffic carpet for a split second.

4)  Notice the next time your young child starts to fret during a loud storm.  Wooooh, it’s so loud, say, let’s look out the window, Ohh, I see lots of wind, and there’s going to be another loud noise I bet; I wonder how loud it can get…. Your pillar of calm and curious observation will speak many more volumes than saying over and over “calm down.  It’s just a storm.”

5)  This final example is not recent, but when my middle child was 2, and my youngest was a newborn, we got in an insane car accident, where a huge truck rear-ended us, and the whole car spun around.  Everyone was ok, but the impact was so intense that our big SUV wasn’t even drivable. I was worried that my toddler would never want to step foot in a car again after experiencing such a collision. So I had to turn my frantic face into an intentional smile, and make some dismissive comment about the car being bumped…. “Bumped” is something he associates with resilience, a temporary jarring, but all-together not catastrophic.  And, after that no-big-deal evidence, my little detective didn’t  give the incident (or riding in cars in general) a second thought.

Why all these intentional theatrics?  Because our kids are ALWAYS being thought detectives, even when they are too young to understand words of reason.  It’s just that the only evidence they are recording in their detective notebooks at those young ages happen to be their parents’ non-verbal cues.  And we want their detective notebooks to be filled with notes saying “the world is a stable and safe place.”