His name is “Nick,” but all his friends call him “Bro” 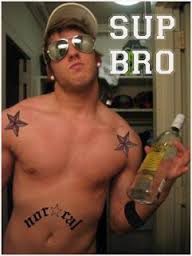 The first time you met him, he wore a flat-billed, fluorescent hat and this shirt:

You can hear the Limp Bizkit blasting before you even see him roll up your driveway in his mom’s mini-van. You guess that he is hiding the smell of weed with the cloud of Axe body spray that surrounds him.

He never looks you in the eye and calls your daughter “shawty” or “doll” or sometimes “bae.” You seriously wonder of he knows her name is “Jennifer.”

Your daughter calls him “Nicholas,” and she wears four pounds of makeup and shirts that would fit a Cabbage Patch kid when he comes around.

You want to lock Jennifer in her room, Rupunzel-style, for the rest of her teen years. You want to forbid her from ever seeing the boy you and your husband secretly refer to as “Summer’s Eve.” But you don’t restrict their love, because you know that would be a sure-fire way to send Jennifer straight into this guy’s minivan of axe-fixiation. And you aren’t interested in becoming the enemy at a time when she may need quite a bit of trusted guidance.
Instead you suggest Jennifer have Summer’s Eve, errrr “Nicholas” over at your house, and make sure to linger around the lovebirds with cookies and conversation. And you call Nick’s mom to offer her some snack recipes and make sure she shares your desire to avoid becoming a grandmother any time soon. You treat time with Nicholas like any other social event- if homework or chores are not caught-up, it’s not happening. Curfew is followed and leniency is earned.

You want to gouge your eyeballs out whenever you catch Scott Dissick’s long-lost twin stealing a kiss from your Jennifer. And you sure as hell want to ignore the nagging reality that they might be having sex.
Instead you hold back vomit when Jennifer comments that Nicholas’s new beard makes him look like Tyler Posey, and seeing his stingy facial pubes reminds you to have the sex conversation. Your stomach churns as you offer a refresher on STDs and birth control, before discussing respect, commitment and emotional consequences.
It’s the most self control and bravery you have ever displayed in your life. You guzzle a glass of wine and nervously finish a Halloween-size bag of candy bars as soon as she leaves the room.

You want to tie Jennifer to a kitchen chair so she remains a captive audience as you inform her of all of Nicholas’s flaws. He’s immature, just wants to get in her pants, and is going nowhere. You’re pretty sure he wears sunless tanner and he definitely wears layered colored Polos with popped collars.
Instead you encourage your daughter’s personal goals and talents, as always. Between traveling softball and mentoring and family camping and shopping with girlfriends, time with Nicholas cannot become all-consuming. And, instead of approaching the situation from your perspective, you take this opportunity to ask her what she looks for in a boyfriend. You are, hopefully, relieved to find that she has standards and deal-breakers, and if you she comes up with none, you offer up some guidance.

You want to control and manage the situation, protect Jennifer from poor decisions, pain, heartbreak, and prom pictures that will be humiliating in decades to come.
Instead you remain involved, directive, and supportive how and when she needs you. You remind yourself that that you have taught her by example and words about self respect and self worth… There is no way that you can be with her at all times now, so trust and respect is everything. And it is your trust in her judgement that probably matters the least- It will be her respect for herself and her trust and respect for you that gets her through the minefields that are the teenage years.

And you, parent of a daughter dating the shaggy-haired lax bro using his mommy’s bankroll for weed, are doing one damn good job.  Now go treat yourself to some more mini kit-kats.