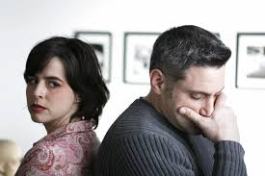 Unfortunately, there’s no alarm bell that magically signals the start of relationship problems.  Usually, problems creep up on a couple, affecting their lives in ways that seemingly have little to do with the relationship.

After several exchanges where he feels disrespected by his wife, a husband may suddenly begin to find reasons  to spend more and more time at work.  A wife, feeling lonely and unimportant, may begin to have a short fuse with the kids and her husband.  And this hypothetical couple may have no idea that their workaholic or irritable tendencies actually stem from their relationship problems.

Wouldn’t it be great if there was a way to detect relationship problems before they do lasting damage to your life, your well-being, or your relationship itself?

Relationship researcher, John Gottman, investigated just that by observing and comparing patterns of behavior in happy vs.unhappy couples.  He came up with four behaviors which he dubbed, “The Four Horsemen of the Apocalypse,” and concluded that these are the behaviors that best predict deterioration of relationships.  Here are Gottman’s Four Horsemen of the Apocalypse, AKA “four not-obvious signs your relationship is in trouble”:

Criticism is a destructive relationship habit.  Criticism means putting down your partner’s character or behavior.  Instead of criticism, healthy couples explain how they feel and make direct requests.  In healthy couples, critical comments such as,  “You never do the dishes,”  are replaced with I-statements and direct requests such as, “I feel overwhelmed when I come home to a messy kitchen;  Could you please put your dishes in the dishwasher before I get home?” If you want to rid your relationship of criticism, practice beginning your statements with, “I feel….” and then asking your partner for what you want directly.

Contempt is any form of disrespect or ridicule.  It can be name-calling, belittling, sarcasm, or any other communication meant to show disgust, disregard, or disdain.  According to Gottman, contempt is the single biggest predictor of divorce.  Healthy couples think in terms of other-appreciation and self-responsibility, and are able to truly validate and empathize with another person.  If you want to rid your relationship of contempt, these mindsets and skills do much to fight off the second horseman.

Defensiveness is exactly as it sounds:  Automatically defending your position.  This occurs at the expense of understanding or validating the other person’s position, and is usually a trigger for the other person to also become defensive.  Examples of defensiveness are making excuses for your behavior, changing the subject to what your partner did wrong, and justifying your behavior.  Instead of being defensive, healthy couples practice daring to see the others’ statements as understandable and true according to their partners’ perspective.

“Stonewalling” is withdrawing from the conversation or from the relationship for the sake of avoiding conflict.  This could occur in the form of “the silent treatment,” walking away, leaving the house, refusal to talk, or non-sensical mutterings.  The solution to “stonewalling” is self-awareness and self-control to indicate that you are too upset to speak constructively, but would be willing to come back to the conversation after a given amount of cool-down  time (20 minutes to a few hours). Thus, there is no avoiding the topic or the relationship partner. A relationship without stonewalling is a relationship in which problems and conversations are addressed instead of swept under the rug or ignored.

If any of these signs sound like a habit of you or your partner, the good news is, researchers have found that couple are able to change these habits with guidance and practice.  Couples counseling may be a helpful way to learn and practice alternative communication strategies if you notice any of “The Four Horsemen of the Apocalypse” trampling over your relationship.

As Usual, Just Something to Think About!

Says the psychologist who is also married, so she knows there’s no way you’ve never done any of these, and also that the first step toward changing the behavior is noticing you did it after-the-fact and apologozing.