My kids were annoying the crap out of each other the other day. HARD-CORE. In fact, their shenanigans annoyed ME enough that I had no choice but to annoy them BACK with a handy dandy “psychology lecture.”

Anyway, the particular lesson on the annoying-mom-court docket that day was simple:  Sometimes, when trying to get along, you have to meet each other halfway. 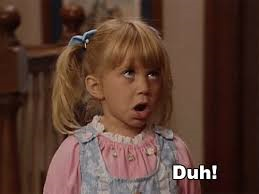 Careful, Michelle. It’s not always quite that simple.

I told their bored, blinking eyes, all about how when mommy leaves the toothpaste chunked all over the top of the tube, daddy starts to twitch and fantasize about living in a tiny never-sticky bunker in the back yard. And sometimes daddy being bothered by the-stupidest-most-inconsequential-shit-ever makes mommy feel quite controlled and stabby.

…Anyway, just like brothers, (well not exactly like brothers, uhhhemm) Mommy and Daddy really love each other. So we think it is WORTH it to “meet each other half-way.” Mommy sees that she could try to remember to wipe the toothpaste top; And Daddy could try to take a breath and relax a little bit with his criticisms, try to notice that mommy is trying, dammit but her brain doesn’t automatically notice that stuff so don’t take it so personally GAWWW. *Ok, so I may be paraphrasing what I actually said.

My kids nodded and squirmed, no-doubt counting the seconds until they were allowed to get out of this weird conversation and get back on their bikes. So I only held them captive long enough to concretely apply this concept to their particular issue. One kid had his “thing to work on,” and the other kid had his. I even had them sign a contract because I’m evil like that. (But I promised not to put it on the fridge in case friends came over because I’m not THAT evil.)

Anyway. When it comes to adults navigating romantic relationships, the whole “meet each other halfway” often doesn’t seem so cut and dry. In fact, “halfway” is often a myth, and sometimes it’s more like “you change a shit ton and YOU just positively reinforce it.” But, many themes of this lesson are applicable to even to the stickiest of couples scenarios. Allow me to illustrate by applying some bullet point suggestions to a super common couples problem:

Let’s say that a woman is feeling emotionally detached and unfulfilled in her relationship. She wants a deeper connection, to be less lonely in her relationship, to feel more understood and valued, maybe even to grow in some spiritual-emotional way as a team. And her man is super matter-of-fact, pretty fulfilled by such simple concrete (and largely individual) activities as pulling a decent paycheck for a decent day of work, and then coming home to watch his favorite show and have sex with the woman whose love is absolutely assumed.  He’s usually a decent enough guy, sincerely caring, but either anxious or inept when it comes to emotional aspects of intimacy (In rare cases he may be both anxious AND contemptuous of emotional intimacy;  This is true sometimes when his family or origin was emotionally mercurial that it compromised his sense of safety/security/adequacy). He tries to solve his wife’s restlessness and commonly-expressed dissatisfaction by suggesting she “take a class,” “join a meetup group,” or -gasp- “see a doctor about getting that PMS regulated.”

What to DO!? How does THAT couple “meet each other halfway!?”

The goals in any relationship conflict resolution are always 1) genuine empathy and 2) productive behavior change.

A therapist (or you yourself) can parse out your individual behaviors and mindsets that preclude you each from accessing genuine empathy and/or behavior change.  (Because you BOtH have to do heavy lifting, from both sides of the problem.)

In my kids’ case, in the case with the lonely wife and emotionally-avoidant husband, AND in my own toothpaste-mess situation, three things were getting in the way of each person accessing empathy and executing a new behavior. And these three resolution-traps are all-too-common to most couples:

a) One or both people believe: “The OTHER person is the one who is the MOST wrong, so my anger and lack of behavior change are justified.” I mean, if I’m honest, sometimes the whole “most wrong” thing may be true, albeit one of the most counterproductive justifications for maintaining unwillingness.  (In these cases, I like assigning each person to write apology letters for their parts, with the expectation that they are specific and empathy-oriented, and that they contain no mention of the other person’s behavior.)

And EVERYONE is being REACTIVELY PROTECTIVE instead of being mindfully aware, self-soothing the internal distress, and behaving intentionally.

c) One or both people in the dynamic don’t know HOW to effectively engage in a new behavior (due to both nature and nurture).  Seriously. The emotionally-avoidant guy has never practiced the whole eye-contact, asking deepening questions, validating-instead-of-fixing, reorienting himself to the conversation when his mind wanders, and offering connecting topics/gestures/humor/playfulness. (Well, more likely, he may have briefly practiced these things much earlier in life, but found that they lead to pain and emotional danger. Hence the ingrained hesitation/automatic avoidance.) The wife may have no freaking clue HOW to navigate her life, both within her relationship, and outside of it, in a way that leads to personal fulfillment. It may not have occurred to her that learning about xyz, working her way up the corporate ladder, buying a boat, becoming a parent, or even going on regular date nights have much less to do with her overall contentment than deepening one friendship, forgiving herself for some deep-seated personal shame, acknowledging realities (husband’s automatic method of operation perhaps?) without attaching personal meaning, having one meaningful conversation, or joining one important cause. And neither person in the relationship may be well-practiced in self-soothing in order to make room for the empathic imagination required to ultimately lean into the others’ perspective.

And THAT, ladies and gentlemen is the internet, what I put in my kids’ contract, complete with deep breaths and respectful tone-of-voice, and it is also what I suggest for any of you who are navigating relationships of your own.

Because even though none of this is technically meeting oneness another exactly “halfway,” the idea is you each do something to help the dynamic.