Any adult who has had me for a therapist knows I ask one weird question to take the temperature of one’s mental well-being:

Pristine? Probably a low tolerance for disorder and a higher need for control. Maybe a little tightly wound when your kid says the p-word. (Play dough, duh.) Maybe a slightly anxious attachment style or skiddishness with the uncertainty of emotional intimacy.

(Or I could be totally wrong. This question isn’t diagnostic, just a question that leads to more questions.)

My point is, clutter matters. Its existence can be both the cause and the result of emotional turmoil. And that is not only true for adults- kids are also affected by the presence of too-much-mess and too-much-stuff.

But good luck explaining that to your kid who proclaims every shitty piece of birthday-goodie-bag loot an absolute prized possession and cries when you put even a teacher’s typed note in the recycle bin.

Yes, I am talking from experience. And yes, even though I have at least one quasi-hoarder child, I actually accomplished the unthinkable today:

I got rid of my kids’ crap RiGHT in front of them with ZERO tears. Here’s how to get rid of your kid’s useless shit – for their own good- like the absolute ninja-parent that you are:

1) Notice, around the 2nd or 3rd week of summer, that the walls seem to be closing-in on you and you can’t-take-the-nonstop-mess-created-by-the-Tasmanian-Devils-who-are-now-home-from-school.  Breathe through the panic and overwhelm while you sit on a closed toilet in a locked bathrlom, telling the boys that try to break in that “mommy’s pooping.” When you stop shaking, and are in a sufficiently un-homicidal mindset, retreat from the bathroom with a forced smile.

2) Pile every toy your kids own, gathered from every room of the house, onto the floor of the living room. Note that firstborn rule-follower will state aloud that it would be unfair for Mom to ask kids to clean it up after she intentionally dumped all the bins. Note that youngest will jump in the pile head-first and also highly sensitive middle child will need to be reassured that mom is not crazy or angry and not going to make him clean it all up.

3) Give each child their very own gigantic plastic tote and have them pluck their 25 favorite toys from the pile. Field questions about what is happening to the remaining toys by reorienting them to their task and lying. I’m not sure what we are doing with those toys, but oooh-don’t-you-want-to-put-this-transformer-in-your-bin?

4) Find a video game (or non-junky toy that they’ll actually play with) on Amazon that your kids are dying for. Casually mention that too bad it’s soo expensive and their birthdays are already past. If only someone could think of a way to earn some money.

6) Stand there as spoiled-rotten kids beg you to have a garage sale.  Throw all the un-prized remaining toys into several humongous bins, and put them out on your front porch. Alert the neighborhood via Facebook that toys are available for 25 cents each via honor system and leaving $ under the mat. Bring whatever is left over to Good Will. 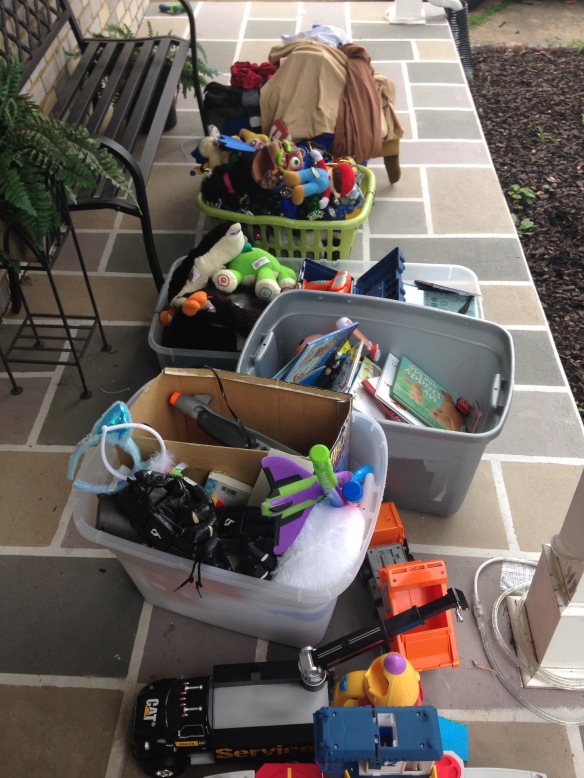 7) Vow to stop buying junk, no matter how much middle child begs for a $39, 6-inch transformer next Christmas, and only ever purchase useful, durable stuff.

8) Mutter something about the lesson of “stuff doesn’t make people happy” as your kids run outside to play with rocks and sticks in the back garden.

9) Three days later, as everyone is calm, creative, and much less overwhelmed, note aloud the positive psychological effects of having less STUFF. Smile and say “at least I tried” when middle  child immediately asks if the tooth fairy can bring him a Magic 8-ball.

And there you have it, a vital parenting skill spelled out in a blog post. Because if clutter makes mama bat-shit-crazy, it probably doesn’t sit too well for the kids either; but of course they just act up instead of calmly requesting an organizational overhaul.

And for the record, I have a similar process with my own clothes and junk. Just instead of using manipulation to stave off anxiety and tears, I use cake. True story.