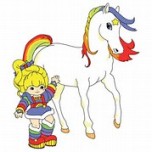 Rainbow Brite:  Every October since college, I have imagined, just for a night, rolling around in smiles and stripes to become some version of this childhood icon.  This year, I finally fulfill my decade-long dream…

Striped Socks to wear on my legs AND arms: Check 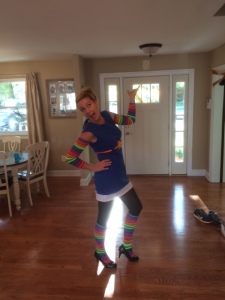 Every girl that grew up in the 80’s knows that Rainbow Brite’s sidekick is a beautiful horse named Starlight.  Therefore, there’s only one thing for a Rainbow Brite wanna-be wife to do for her man-  Whip out the hot glue gun and make him a cute horsehead mask with a colorful mane.

Step one:  Convince husband that wearing bizarre mask is in his best interest.  Tell grumbling man that the extent of his cooperation with his costume will dictate the length of your own Rainbow Brite dress as well as whether you wear leggings, tights, or nothing under said dress.  Watch as he shuts his mouth and shrugs his shoulders in defeat.

Step two:  Cut pieces of fabric  into the following shapes. (Joanne Fabric has 50% off their remnants pretty much all the time) 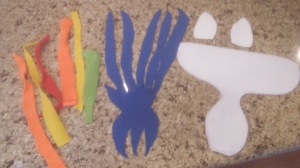 Step three:  Hot glue the top of the blobby white shape onto a thick headband. 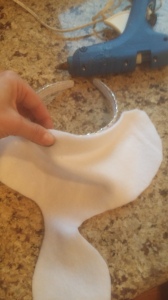 Step four:  Hot glue the ends of the colored strips to this part of the blue fabric piece. 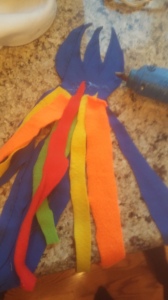 Step five:  Hot glue the piece to the top of the headband like this. 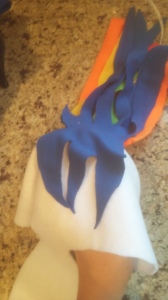 Step six:  Add ear pieces and a yellow star to the white fabric and draw/paint some horse-face-details: 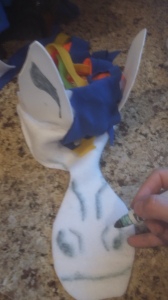 Step seven:  Fold and glue the corners of the white fabric to the bottom of the headband (so that it curves around the face instead of sticking out flat): 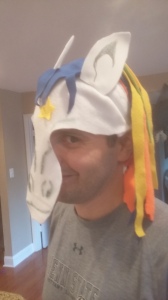 Step eight:  Verbally appreciate how good of a sport your husband is for putting this piece of crap on his face and letting you put it on the internet: 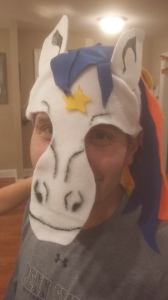 Step nine:  Recall husband’s language of love, and ditch the words of appreciation. Make husband some breaded chicken stuffed with broccoli and watch the Penn State game with him even though you went to Wisconsin.  (Also seriously consider alterations to costume dress length.) Because he IS wearing that stupid-ass mask to the party.

And there you have it, the ever-helpful tutorial on how-get-what-your-ridiculous-heart-desires-while-still-preserving-your-man’s-masculinity, which is indeed a very useful skill, regardless of whether or not you are a similarly huge fan of Rainbow Brite and couples-themed-costumes.