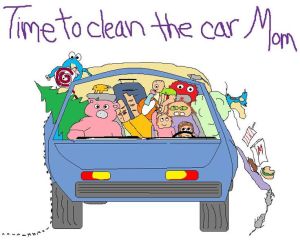 Dear neighbor who recently made the innocent mistake of asking to ride in my car to our mutual destination,

I apologize for my deafening and abrupt “NO.” I noticed that my intensity caused you to pause and blink, rightfully bewildered.

I’m also sorry if I involuntarily placed my hand on your sternum and applied steady pressure until you reached the driver’s seat of your own minivan. I can’t be sure I didn’t harm you; When I go into “panic mode,” I tend to instinctively dissociate.

You see, sweet neighbor, your impeccably arranged spice rack and alphabetized Lazy Susan clued me in. (Remember that time when you weren’t home and you gave me permission to rummage, unsupervised, through your cabinets?)  You, and likely your husband and lovely school-age children who live in a world lacking paprika dust and syrup spills, would likely need a tetanus shot after experiencing the fumes and traps within my Snackura M.D.Mess. And we simply did not have time to review immunization records and/or fit you for a hazmat suit on our way to the pool, now did we.

You see, my socially-awkward outburst, while alarming at the time, was really in your best interest.

Yes, my vehicle contains the usual culprits well-known to parents of small children: Moldy French fries and petrified sour-patch-kids hide inside most of the far-too-narrow crevices. (I propose the tiny-handed elves who design these spaces at least throw a pair of chopsticks in the glove compartment.)  But, not to brag or anything, the Shiels Wheels also has a few other nasty surprises…

Also. Who knew that rotting fruit could smell like a wet Cocker Spaniel covered in Limburger?  One little peach started to rot under the front seat, and, weeks after the the offending fruit was removed, Charlie still asked Ronnie if he took off his shoe in the air-blower again.

Which reminds me:  My boys do take off their sweaty shoes.  In summer.  While the air blows directly on them and circulates through the vehicle.

Also, and I am not aiming for shock-value, as this is truly what happens when you put three small boys side-by-side in one bench seat: My two youngest often entertain themselves by flicking their boogers during boring car rides.  I try to catch them (the boys, not the boogers), but I haven’t quite mastered the skill of effective parenting while not crashing into a tree.

In addition: My youngest has such raging, sudden-onset hanger, that restricting his eating in the car will result in two days of ringing in my ears. As an alternative to allowing him to eat, I suppose I could just crash into a tree. Ummm….yah.  Moving on.

Anyway, the aforementioned insatiable child LOVES bananas lately, which, incidentally, when smudged on the window next to him, look eerily similar to his boogers.  Who knew.

And that brings me to the problem with the banana peels (and other trash).  With my arms full of the fifty stuffed animals my little hoarders bring on every-car-ride, I generally overlook the sticky clumps of smooshed-together granola bars that adorn the floor mats.  There was one time when I decided to act like a good parent who holds her kids accountable for cleaning up their own messes.  On that day, all the boys fell asleep, and after carrying them, one-by-one up to their beds, I chose to zone-out on Facebook instead of scouring the car for potential rot.  When it comes to car-filth, I too-often choose in favor of avoidance, I must admit.

In fact, maybe if I paid more attention to removing the decomposing contents of my vehicle after a drive, I would have been able to gracefully welcome you into my passenger seat on that fateful Friday evening. But, instead, I have become accustomed to neglecting my vehicle in favor of hastily shuffling my children away from the street and screaming to put down the dead cicada before you go in the house!!.  Our next home will have an attached garage.

Speaking of outdoor creatures, it is also true that if I paid more diligent attention to the cleanliness of my vehicle, I would not have recently come across the pile of dried worms in my oldest’s cup holder.  I’d imagine, polite neighbor, that you would have  pretended not to have seen the stringy black carcasses, but we both know the sight would have spoiled your appetite for poolside fish tacos.

So, dear neighbor, again, I apologize for startling you instead of explaining myself as gently as I have in this letter.  I hope you understand my firm stance on the matter.  In the future feel free to propose a joint adventure in my vehicle.  However, just make sure to give me a day or two’s notice.

1 thought on “Dear Friend, Sorry But My Mom-Mobile is Too Dirty For You to Enter.”