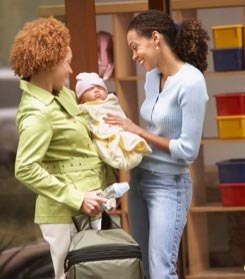 So yesterday, while sitting in the waiting room at the doctor’s office, I gave my two-year old three lollipops in a row.  With red dye number 4. Err… or whatever the stuff is that is supposed to make him grow horns and a third eye; I don’t even know.

A mom looked over at me, while I sat contently on my phone, updating Facebook or some super unimportant thing, ignoring my pink-slobbered, sticky kid.  The mom didn’t say anything, but she looked-on for about one second too long.  I felt her eyes, and looked up just in time to shoot her back one of those sarcastic, eyebrows-up, jaw-jutted-out, “b**ch-what-you-lookin-at” expressions. (I learned this particular facial expression about five years ago when I first moved from the Midwest to the East Coast.  My husband is not pleased that I now have something so lethal in my repertoire.  Not pleased at all.)

Anyway, in a freaky twist of the universe, today, the day after my aforementioned questionable parenting and interpersonal behavior, I was asked to speak at a local MOPS meeting about “moms respecting each other’s unique personalities and parenting differences.” Oh yippy, I thought, I hope every mom who has ever given me the evil eye for letting my kid wear a Batman costume to the Nutcracker Performance, or scoffed at me for using spray sunscreen on my toddler, is in the audience.  But, moving on.

I think most of us moms try to show empathy, to validate, and to give other moms the benefit of the doubt.  We keep our own sleepless, struggling, end-of-our-rope mommy moments in mind when we consider: 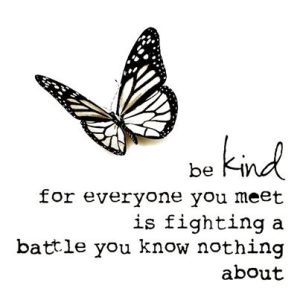 But allow me to be the first to admit that I am not miss-perfectly-pure-of-thought, despite the fact that my mother ironically named me accordingly.   I am not immune to raising the proverbial eyebrow from time to time, as laid-back hippy as I am (Yes, that is what I call letting my kid eat Cheerios from the car floor and teaching my six-year old to do the sniff test for picking out socks from piles of  clothes: “Laid-back hippy.”)  In fact, I just gave a little eye roll a few hours ago when I overheard a mom making her 1-year old apologize for lying.  Dude, controlling much?  Care much about what onlookers think?  Don’t consider much that your kid has no flipping idea what a “lie” is?  Oh yes, these were my thoughts; embarrassingly judgmental as they may be.

And you know you have those thoughts too.  And if you don’t, just hang around me for a while, and I’ll give you something to judge. As I type this on my phone, I am letting my toddler swim in a diaper, a puddle jumper, and sneakers, since we couldn’t find any waterproof shoes and there are bees hiding in the grass. And all three of my boys are playing monkey in the middle with the dead frog they found in the filter, no joke.

So why is it that we women tend to have such a hard time with respecting personality differences and individual parenting choices?  Why did you just cringe and think how horribly ridiculous I am to risk exposing my kids to frog guts? Why do we forget how to simultaneously restrict our own kids from playing with animal carcasses AND maintain respect for the mom who cares not about her kid tossing around a reptile bloated with chlorine? I think four things are happening:

1) We want to feel “adequate,” and being “better than another mom” makes us feel better about our own parenting style, choices and abilities.

2)  We want to be recognized for our “adequacy” or believed by others that we are doing a good job (AKA validated).  Gossiping  about how Susan gives her kids Doritos for lunch showcases our superiority and tempts to give us that recognition.

3)  We are uncomfortable with the fact that often, we moms have no flipping control whatsoever over our kids.  If we protest with judgment of another mother’s inferior method, this suggests that we have some sort of method that might actually be effective. This thinking fools us into thinking that we might have some sort of control, after-all.

4)  We judge because we sincerely think that another mom’s choice could negatively affect their child, and we have genuine concern.

HAA.  Just kidding about that last one.  That was just some bull-malarky to see if you were still paying attention.  Does anyone get all judgy and superior simply because they are just so darn blessedly concerned?  Uhhh….Sure.  And right now Michelle and Jim-Bob are listening to Eminem and practicing their twerking for Jessa’s wedding.

You see, if it were simply acting on our concern that another mother’s choice was legitimately problematic, and were not seeking to feel superior and validated, we would find a decent way to rectify the situation.  We would remain respectful, and maybe even extend of ourselves.  We would find a non-humiliating, compassionate, and respectable way to be helpful, not judgy.

If I was truly as “concerned,” as I like to fancy myself, I would have smiled at the woman in the Shopper’s parking lot with her car-seat-less three year old in the back seat, made some small talk with her, and offered her one of my old boosters that we don’t use any more. If that lady in the doctor’s office was really concerned about my kid’s red dye consumption and the fact that he was being ignored, she would have offered him one of her kid’s bento-boxed organic apples meticulously washed and carved into the likeness of an Empire Penguin colony.  And if I said I was concerned that the one-year old repeating “I sowwy” for no reason was going to be scarred for life, I would be lying.

It’s pretty simple:  If we found a way to meet our needs for adequacy and validation, we wouldn’t feel compelled to act superior and controlling.   We could all act like a village instead of like competing individual entitites.

And a village that goes around giving each other help and high fives breeds no reason for superior, validation-seeking judgment.

And that kind of a world also makes it a heck of a lot easier to tolerate, without lashing out on each other or lashing out on our kids, the fact that we often have no control. Now, as a village, instead of losing our sh*t or trying to yell and punish our kids into submission, we can somehow tolerate and accept the tantruming child, the kid who does not have the impulse control to keep his hands to himself, the insistence on pooping in brand new Ninja Turtle underwear instead of using the potty, the fact that theses kids do not believe me when I tell the that having a “lay still and close your eyes party” at 6:30 pm is “really fun.” Anyway, moving on.

The answer to the problem of judgy moms isn’t trying to be more understanding and empathic in our minds, over in our little bubbles on the other side of the waiting room, the opposite end of the restaurant, and in the car across the parking lot.  It is having more communication, reaching out, and stealthily offering that antsy child’s mom a lollipop.  Even one that has red dye number 4 (40?  Google says “40”).  Because when we are being a village, we have no motivation to judge.

To steal a phrase  from one of my favorite articles ever, “We have lost ‘the village’ to judgment and pressure.  It might be time to take that shit back.”

Liked this article?  Don’t forget to find me on Facebook!